Viks get some mojo going in BSC opener 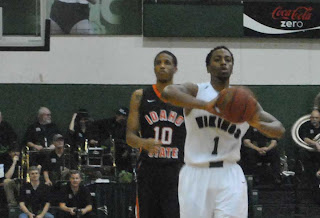 Trailing 40-36 early in the second half, the Portland State Vikings dominated Idaho State for the remainder of the game and won their Big Sky Conference opener 63-49 Thursday at the Stott Center.

Lateef McMullen matched his career high with 20 points and had four assists and four steals to lead the Vikings, who improved to 3-5 overall heading into a home game with Weber State Saturday at 7:30 p.m.

"This is probably the best half we've played," Vikings coach Tyler Geving said. "The guys stepped up when they needed to possession by possession. Now, we just have to keep that up Saturday against Weber State."

Idaho State, which entered the game as the lowest scoring team in the nation, dropped to 1-8 overall.

The Bengals broke free from a 28-all tie at halftime to lead 40-36 with 15 minutes left, but the Viks took back the lead with a five-point play that included an offensive rebound from a missed free-throw, basket and free throw by McMullen for a 41-40 lead.

McMullen hit 7 of 9 shots from the field.

Weber State enters the game at 5-3 and 1-0 in conference play.

Posted by oregonsports at 9:36 PM No comments:

It's almost a huge win

The "Whiteout" happened to a modest degree, but it didn't turn into a victory for Portland State Wednesday night at the Stott Center. 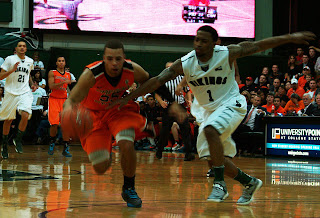 An inspired opening 10 minutes had earned the Vikings a 22-13 lead in a rare home game with a major college team, but the Beavers ramped up their defense and got some energy from a technical foul on their way to a 79-74 win in a non-conference men's basketball game.
Devon Collier scored 23 points, 'Burly' Joe Burton bruised the Vikings for 20 points and seven rebounds and coach Craig Robinson earned his 100th career victory at the school.
"We needed a true away game where we were going to be tested," Robinson said after his team improved to 6-2 on the season. "It's nice to win this game."
PSU got eight points early from Lateef McMullen on the way to a team-high 16, but the Viks had 19 turnovers and got outscored by 12 at the free-throw line before a crowd of 1,500 - a good chunk of which was wearing orange for the Beavers.
The Vikings dropped to 1-5 on the season.
Oregon State fell behind early, but ramped up its defensive presence around the 1-3-1 set once the deficit grew to nine. And, Robinson, sparked by a non-call, got a technical that seemed to inspire the team, especially when the Vikings' shooter Michael Harthun missed both free throws.
By the close of the half, the Beavers led 32-26 and built that lead to 14 before the Vikings produced a mild comeback.
Posted by oregonsports at 12:43 AM No comments:

White Out Night Out

It's a white out!
The Stott Center should be bursting to the seems when the Beavers hit the court tonight for their game with Portland State on the PSU campus.
Can't wait to get there and shoot some pics.

Posted by oregonsports at 6:32 PM No comments: